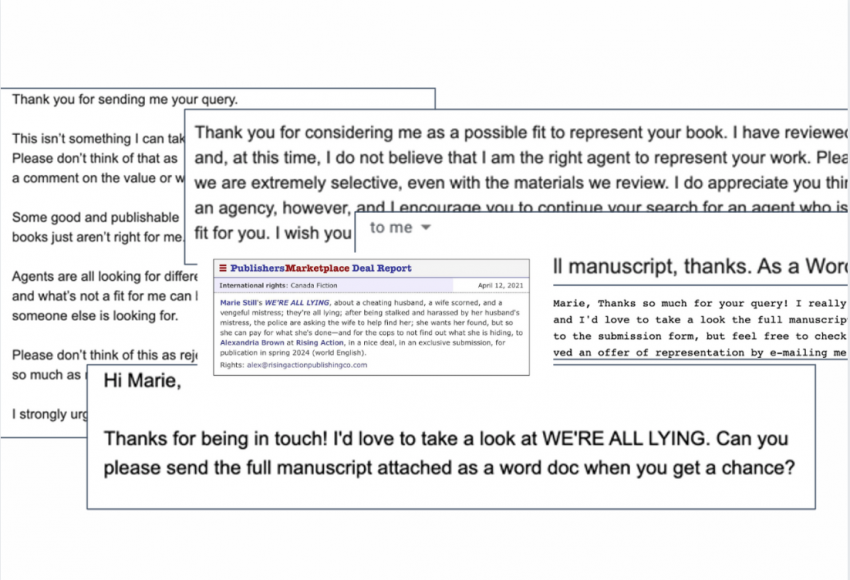 Writing can be a lonely path, especially for new writers. But you are a writer, you have stories to tell, and a dream, so you dive in, full cannonball, with fingers furiously flying over the keys. Then you type those two words, after tens of thousands of words you had no idea the emotional power writing those two words would have, but they do: The End.

Beta readers, critique partners, developmental edits, line edits, etc. It’s like drinking from a firehose. But your dream is so close, you close your eyes and picture your readers curled up on their couch, reading your words, being moved by your creation.

There is no “right” path to publishing; there is only your path. I’m still walking on my path, so I write this to new writers from the perspective of someone who was and is still standing in your exact spot.

Once your work is complete, you have three choices: Self Publishing, Indie Publishing, Literary Agent Representation (you also have vanity publishing, but don’t do this, if anyone tries to charge you for anything, a literary agent for reading, or a publisher for publishing, hold your book baby to your chest and run faster than you’ve ever run).

The “big” traditional publishers won’t accept manuscripts from authors directly, so if your dream is to be published by one of the bigs, start with agent querying. Agents will generally not rep a manuscript that’s been submitted to a lot of smaller presses, so a good order is query agents, query small pubs, and then self publish. But only if having an agent is a goal. If not, then self publish, or go straight to the indie presses. Because all three paths are right and amazing. And each has its own benefits.

My Original Goal: Get an Agent

After I finished my first novel I threw out queries to agents, I had 68 rejections and 2 full requests (ooof). My second novel I queried 80 agents, within two weeks I had 13 full requests and 6 rejections. But the third week, I got an offer (more on this later).

Wait a second, 80 queries?? All at once? Yes, everything I could find on querying agents said send 10 at a time, but it also said it can take 4-6 weeks to hear back, and that 10% is a good full request vs. rejection rate. A little mental math and I realized I didn’t have the patience for that kind of wait. So the first golden rule of querying was broken, and I yeeted those manuscripts out to the 80 agents I was interested in.

With my first go at querying being not so awesome, when the full requests started rolling in I was the human version of the ghost emoji, hands to cheeks, screamy face. Some of them within hours, and some of them representing the biggest names in the genres (is this real life?).

Then I met my publisher and everything changed.

I was living the dream, getting fulls, so close to the ultimate “goal” the one all writers strive for. After a two hour meeting with Rising Action Publishing, who would ultimately become my publisher, I changed my mind. I didn’t want an agent (don’t get me wrong, I will still cheer every writing friend on through the agent querying process, and celebrate every single one of them when they sign those contracts), but I discovered that the agent path to publishing isn’t the only right one.

Side bar for any authors meeting with indie publishers some suggestions on questions to ask before signing with them:

I was blown away by the professionalism and knowledge the two women who own Rising Action Publishing brought to the table. But it wasn’t just that, probably more important was the passion my editor, Alexandria Brown, showed for my book and career. There is so much that goes into publishing a book, and you will be working with your editor (and agent if you have one) very closely (with the amount of texts, emails, Instagram and Twitter DMs I send her daily she may say too closely on some days ;)) finding someone who shares your vision, and who believes in you is where the magic happens.

So I did the unthinkable – I pulled back every full request from top tier agents. Agents most writers, especially in my genre, would give up coffee to have them read their full MS.

Two months later I have two books under contract with Alex, and one in the works she has an exclusive on. I have zero regrets. Well, other than the fact I had to send “Please withdrawal” emails to the other 61 agents who hadn’t responded yet, that was an hour of my life I’ll never get back.

From my very short few month swim in the querying pool, here are my tips:

And if you buy my books (WE’RE ALL LYING, BEVERLY BONNEFINCHE IS DEAD, AND MY DARLINGS) when they come out, I’ll love you forever. Follow me on Insta for updates (and other sometimes funny, sometimes inspiring musings): https://instagram.com/mariestillwrites

And for those of you in the querying trenches, here is the letter that got me all those coveted fulls:

Thank you for considering WE’RE ALL LYING (78K, domestic suspense).

A cheating husband, a scorned wife, and a vengeful mistress. They’re all lying.

Cass’s mostly perfect marriage crumbles when she receives an email from her husband, Ethan’s mistress. Even worse, the mistress is Emma, a girl who works for Cass at her advertising agency.

Neither women are ready to give up the man, or the life they believe is rightfully theirs. But Emma doesn’t know who she’s up against. Because Cass has a background full of dark secrets and bad behavior. And she never loses.

After months of Emma stalking and harassing Cass, Emma has disappeared. Cass’s past might have finally caught up with her.

We’re All Lying will be Marie Still’s debut novel. She holds a BA in English and an MBA in Marketing. Her day job is Executive Vice President of Retail at a consumer electronics company where she runs product development and marketing. Her night job is raising four minis, two fur babies, and a very grumpy hedgehog while spending time with the dark and twisty characters who live in her head.

Whether you are self publishing, querying for an agent, or querying indie publishers, you’ve got this, I’m rooting for you!

1 thought on “Rule Breakers or Makers: Finding Your Path to Publishing”