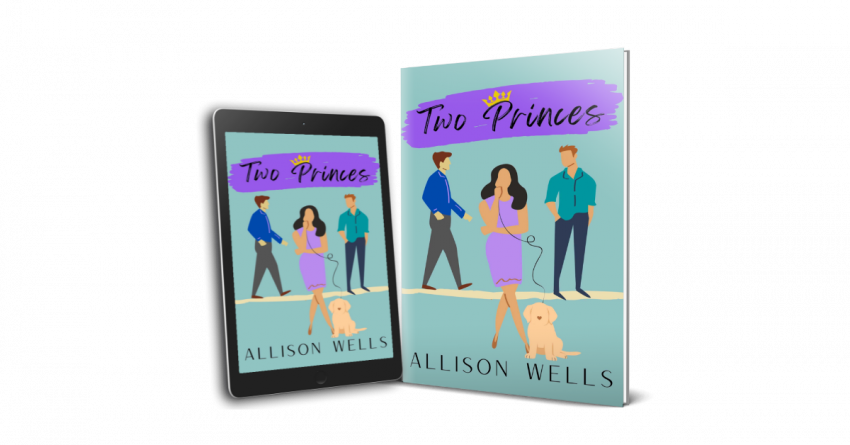 I like romance. Okay? There I said it. I especially love a sweet romance where you just know that these characters belong together. A good love triangle just adds the perfect amount of drama, and that is exactly what happens in Allison Wells’s Two Princes. And yes, the song inspired the book. She even made a TikTok about it.

If you aren’t familiar with Allison, this is her first venture into the self-publishing world after a career in traditional publishing. She’s from South Carolina, and all of her stories take place in the south. She writes what she calls “gritty Christian fiction,” books that show the hard truths of life but ultimately are stories of redemption in the end. For more of her work, check out Amazon.

Our female main character is Hana Willis, a young popular romance author that spends more of her time taking inspiration from life to use in her stories than actually living. She is Korean American living in the charming South Carolina town of Greenville. When her friend’s new husband, who happens to be allergic to dogs, has to move into their apartment with them, Hana has to find a new place for herself and her dog.

Chas Rossi, comes from a successful family. His father started a real estate company that Chas is now running after his father moved on to politics. Chas is very aware of his appearance and his life revolves around work, he even keeps his house show ready in case it’s the perfect fit for any of his clients.

Pace McCoy runs a successful bar that was handed down to him from his grandfather. He is also the founder of an animal rescue that he runs along with his brother and sister. He loves the bar but the rescue is his passion.

None of them think they are in the right place for a relationship. They are all focused on their careers and don’t see how they would have the time to fit it in. However, that begins to change when Chas and Pace meet Hanna. She forms friendships with them and they start to catch feelings. Hana is, of course, completely blind to the fact until her friend points it out to her.

She is getting ready to tell each of them about the other when she makes a rash decision that she feels is better for everyone. Hana is working on a deadline to finish her story and working to untangle the mess her life has become. When tragedy strikes and everyone jumps into action, Hana realizes what she needed to know all along.

When the story began I thought I had it figured out. I picked my side and that was the Beaux I wanted for Hana. But, part way through Allison threw a kink in my plan that I had not expected and I realized I did not have the story all figured out. I enjoyed how Allison built the world around the characters and how realistic they felt. The Dialogue was spot on and not forced and it flowed well with the overall story.

I did not want to put the story down. When finishing in one sitting was not an option, I messaged Allison complaining that I just wanted to finish instead of being an adult. I stayed up way too late (into the early morning) binging the ending and I do not regret a thing.

About The Writer: Amber J. Painter is a fantasy-romance, young adult author who resides in a small suburb of Atlanta with her husband of seventeen years, two children and a crazy miniature pinscher rescue. When she is not writing, she is homeschooling her kids, wrangling the dog or working at her church. Check out her Kindle Vella series The Havoc State.