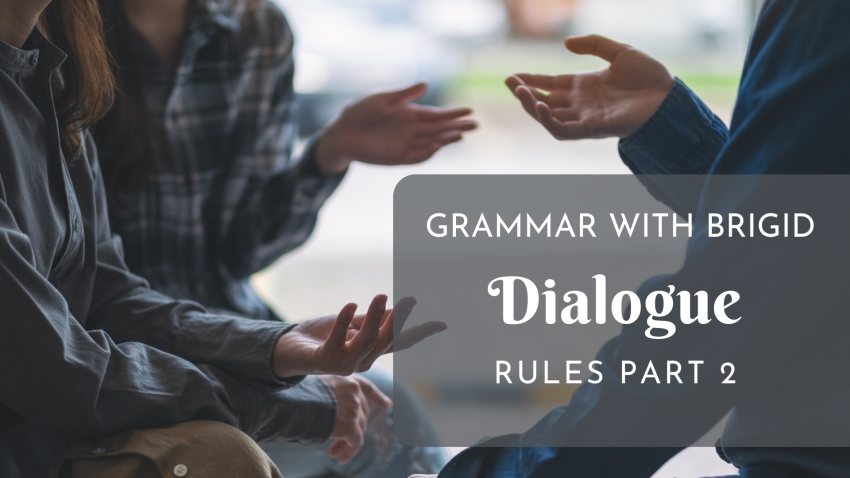 For those who struggle with writing dialogue that sounds like actual people talking, this one’s for you! In a previous blog, I discussed how to structure dialogue. This blog will focus on how to write compelling dialogue that makes your characters seem realistic and gives your story depth.

A dialogue tag gives the reader a quick indication of who’s speaking. It can also provide insight into a character’s tone, emotion, or volume. Dialogue tags can go before, after, or between lines of speech. Where you place a dialogue tag is based on the writer’s preference.

There are some varying opinions on which words are considered appropriate dialogue tags. Some people believe that “said” should never appear in writing, while others feel it’s one of those words your eye ignores. Sometimes, “said” is the best option, but it’s always good to have a variety of dialogue tags, especially when you want to convey certain tones.

Trending
The Future of Us Submissions are Open Now!

The best practice is keeping dialogue tags to words that actually describe speech. Examples include the following:

Obviously, there are many other options. Use your best judgment! If you’re unsure whether the tag describes the voice, consider using an action tag.

Just as some people are in the “said” club, others firmly believe you can only describe speech in certain ways. For example, “That was hilarious,” Jude laughed. Some would argue that you can’t “laugh” a phrase. People always talk while they laugh, but it can be hard to convey that properly in writing.

When in doubt, use those kinds of tags sparingly. You can also modify the sentence to include an action tag rather than a dialogue tag. An action tag describes the character’s actions while they speak rather than how their voice sounds.

Notice the difference in structure between a dialogue tag and an action tag. Dialogue tags use commas while action tags require a full stop. This is the most important differentiation between the two types of tags.

Dialogue tags are a useful tool to orient the reader quickly. However, they become cumbersome if used too often. Read the following example to see what I mean.

When only two people are in the scene, you don’t need a dialogue tag after every line of speech. Readers could use a tag before or after the first time a person speaks, but after that, it becomes distracting. Try utilizing a combination of dialogue and action tags to keep it interesting.

In the second example, I indicate the speaker on most lines but use both types of tags. Not only does it keep the scene interesting, but the action tags give insight into the character’s movements and the setting, and they show rather than tell how the characters feel.

Here’s a secret: grammar doesn’t necessarily matter in dialogue. In fact, if your speeches sound too grammatically correct, they come across as insincere and unrealistic. (To be clear, grammar matters everywhere else!)

If your story takes place in a specific time period, it’s important to use authentic speech. For example, an eighteenth-century aristocrat wouldn’t say something like, “What’s up, bro?” Similarly, a 1920’s gangster wouldn’t use heightened language that resembles Shakespeare.

You don’t have to research linguistics and speech patterns in depth (unless you want to), but at least make it believable.

This was a new term to me, although I’ve seen it in practice before. Eye dialect is more or less phonetically spelling words to mimic how a person speaks. Using “wuz” instead of “was” or other misspellings to show how characters pronounce certain words.

Many authors utilize this style when writing characters with specific accents. Toni Morrison does this in her novel The Bluest Eyes, as does Diana Gabaldon with her Scottish characters in Outlander.

Here’s the thing, though. Eye dialect can accidentally create offensive caricatures if you’re not careful. Think long and hard before using it. Is it really necessary? If your character must have an accent, then can you find a way to represent it sparingly?

Write the way you want your characters to speak. If you want a line to be read a certain way, then write it how a person would actually speak it.

Certain types of punctuation and emphasizing certain words force the reader’s brain to read the speech in a specific way. Just be careful not to overuse this method. Ultimately, you want the reader to have their own interpretation.

Dialogue should contribute something to the story. Real-life people have mundane conversations all the time. But that type of dialogue can make for a slow story. Any dialogue should have a purpose in your story: to advance the plot or to reveal characteristics or character thoughts/opinions that are relevant to the plot.

1 thought on “How to Write Compelling Dialogue”