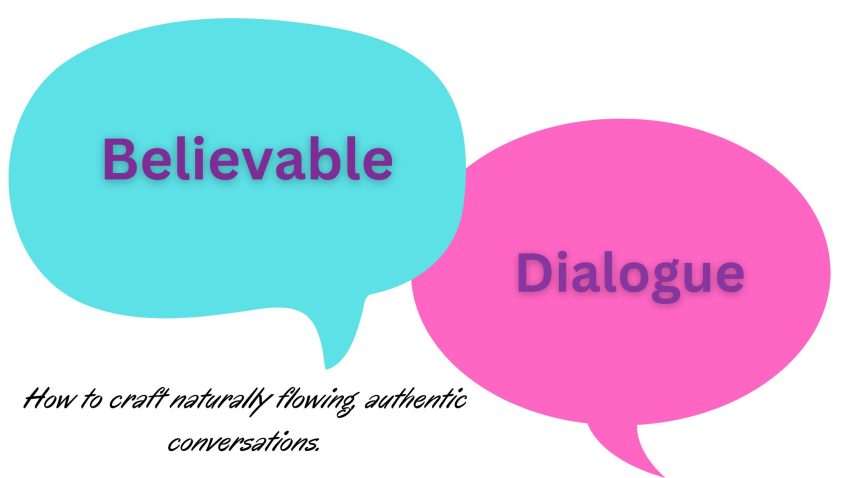 No one likes reading stilted, contrived dialogue. We want to feel like the characters are unscripted—genuine. But it’s quite the trick to write believable dialogue like that while we are literally writing the script. So, how do you do it?

Every character and situation uniquely combine and necessitate their own rules for this sort of thing. However, there are certain no-fail guidelines that apply almost universally. Have a look—and if I missed anything, let me know in the comments!

Don’t forget who’s in the room.

As I mentioned in my blog on writing great fight scenes, there’s nothing more detrimental to the scene than forgetting who’s in the room. Every character present has an opinion on what’s happening, minor or not. Every one of them should have input, or reaction, or some kind of impact. Otherwise, they shouldn’t be there.

There’s nothing wrong with giving a character an excuse to leave the room to avoid this pitfall, but I advise you to try something else first. See from your third wheel’s POV for a minute. Rewrite the scene entirely from their perspective– and then, rewrite from the original perspective, but reflect what you learned about your “extra” character. Try writing them in before you give up and write them out.

You might be surprised how this fleshes out the scene and reveals the deeper inner working of your cast members and their relationships. Let each character react to something they hear, and go with the flow. See what comes of it.

Have you ever felt like a topic switch or spoken revelation just… totally came out of left field?

The most effective way to avoid doing this to readers is to simply allow your characters to converse. Even if you’re only writing from one POV, mind-hop a little: What would that last sentence have made the other guy remember? How would the hearer feel about the speaker’s opinion? Let them go back and forth. Once the direction and tone is set, you can edit down anything too long or clunky.

Now, if there’s a subject they need to cover for relevance, all you need to do is plant what brings it up: a sight, a sound, a memory, or a character who came with the specific intention to talk about it. If your characters have a reason to be talking about it, then they will—and it won’t need to be forced at all.

Much of conversation is nonverbal. Believable dialogue involves more than just the dialogue.

Is there a place where the character’s voice should pause? Fill that pause with the furrowing of their eyebrows, the folding of their arms, the sudden snap of their fingers. Is my character waiting anxiously for an answer? Let them watch their counterpart wrestle with it, bite their lip, exhibit tension in their shoulders; let the one who waits struggle not to tap their feet or speak too early into the silence. This is where show-don’t-tell comes into play. It makes our characters feel so much more real.

And don’t forget to describe things. Describe the characters tone—or even just the quality of their voice. Don’t just tell me the color of their eyes, tell me how they dilate with panic or cast furtively towards the door. Lips don’t just speak; they wobble with emotion or set into thin, tight lines. The dialogue takes on so much more meaning when paired with these details.

I read a book recently in which everyone rolled their eyes. Like, every time anyone said anything. No one had a unique reaction to being annoyed and everyone was always annoyed. It wasn’t just repetitive; it made for flat and uninteresting characters.

When writing believable dialogue, the most important thing is to craft it around the speaker. Say they come upon an unknown round object: do they compare it to an orange, a tennis ball, or stress ball? The character’s personal background should inform the answer. Put everything through that speaker’s lens and tailor accordingly.

Different people express the same emotions in different ways, physically and vocally. The same setback will give some humor, some anger.  For an authentic conversation, you need to employ authentic individuals.

While you work on improving the dialogue in your work, don’t forget to consider the technical side. The art of writing dialogue that reads like a natural conversation cannot be perfected without considering dialogue tags. What are dialogue tags? Generally, it’s anything that identifies dialogue as such– phrases like he said.

The subject of dialogue tags is one of the most-asked-about on writers’ forums, so our beloved grammar guru Brigid Levi wrote an entire separate blog to answer the tags question topic in depth. She also wrote a great discourse on structuring dialogue so that it makes sense. Don’t forget to thank her in the comments!